… warbling a descant at her neighbor’s annual holiday singalong.

No comments | Posted December 18, 2018 9:35AM by Margaret Soltan | [email protected]
Categories: snapshots from home
A Professor’s Daughter is Murdered. A Judge Might have Prevented it, but…

… despite the fact that police had been called repeatedly to the murderer’s home because of his dangerous mental illness, the judge chose to deny the professor’s request for emergency intervention.

No comments | Posted December 16, 2018 12:45PM by Margaret Soltan | [email protected]
Categories: professors
A piece of my hoard be upon you. 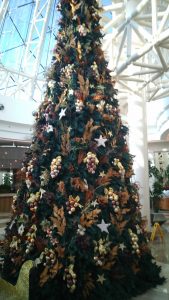 from a Carter Center-

the future of Syria.

His group was on lockdown for a bit.

1 Comment | Posted December 15, 2018 8:51AM by Margaret Soltan | [email protected]
Categories: snapshots from kurdistan
‘[Shawndarrius] Phillips played in 11 games for the [Florida International University] Panthers this season as a wanted man.’

How do they stay knee-deep in sludge?

No comments | Posted December 14, 2018 1:34PM by Margaret Soltan | [email protected]
Categories: sport
‘Across the state, there are dozens of Hasidic yeshivas, with tens of thousands of students — nearly 60,000 in New York City alone — whose education is being atrociously neglected. These schools receive hundreds of millions of dollars in government funding, through federal programs like Title I and Head Start and state programs like Academic Intervention Services and universal pre-K. For New York City’s yeshivas, $120 million comes from the state-funded, city-run Child Care and Development Block Grant subsidy program: nearly a quarter of the allocation to the entire city. According to New York State law, nonpublic schools are required to offer a curriculum that is “substantially equivalent” to that of public schools. But when it comes to Hasidic yeshivas, this law has gone unenforced for decades. The result is a community crippled by poverty and a systemic reliance on government funding for virtually all aspects of life.’

Maybe it was in part in response to these appalling facts (not to mention systemic welfare fraud in some of these communities), appearing prominently in the New York Times, that the State Board of Education just announced serious new secular education requirements, along with serious penalties (loss of funding; possible closing of schools inspectors find noncompliant) for ignoring them.  It’s one thing for us to watch Israel, a Jewish state, suffer demographic catastrophe because of its enormous, ignorant, and overwhelmingly state-dependent ultra orthodox population; it’s another for our proudly secular nation to underwrite such destructive collective behavior.    (Speaking of which.)

Although the relevant rabbis haven’t quite called Andrew Cuomo Hitler yet, they’re getting there.  And though the whole spectacle is on some level laughable, keep in mind that in Israel the ultra orthodox are quite capable of violence, and we can expect something of the same here as our country attempts to deal with a very angry reactionary force within it.

* possession of massive amounts of drugs…

* possession with intent to deliver.

When it’s a way of life in two communities, you get these amusing outcomes.

Controversy swirling around the [amnesty] program [offered to the welfare-fraud-ridden Orthodox Lakewood New Jersey community] has not waned in the last year.

In October, the Asbury Park Press revealed that despite [New Jersey Comptroller Philip J.] Degnan’s public statements that the program would recover all benefits wrongly paid to residents, it recouped less than half and left $2.6 million on the table.

Degnan said he did not know until the final days of the amnesty offer that a rogue employee was offering discounted repayment terms to residents.

But confidential documents obtained by the Press say at least four employees and top-level managers in the office knew and signed off on the negotiated settlements.

The employee who led the amnesty program, Andrew Poulos Jr., claims in an ongoing lawsuit he was fired last year and made a scapegoat for the program while his superiors, who also knew about the deal making, were allowed to continue working. The superiors denied knowing about the discounts, the comptroller’s office has said.

What can UD say?  It’s Jersey.

No comments | Posted December 13, 2018 4:07PM by Margaret Soltan | [email protected]
Categories: just plain gross
‘As for sleep, he slept on a mattress without sheets – it was his abandoned marriage bed – or in the hammock, covered by his coat. Tall bearded grass and locust and maple seedlings surrounded him in the yard. When he opened his eyes in the night, the stars were near like spiritual bodies. Fires, of course; gases – minerals, heat, atoms, but eloquent at five in the morning to a man lying in a hammock, wrapped in his overcoat.’

From the first page of Saul Bellow’s Herzog, this description of a lost soul floating between stars and locust seedlings has always moved UD, herself a serious star-gazer.

Late tonight she’ll haul her less oppressed consciousness out to a dark sky and see what she can see of the Geminids.  She’ll write about it here.

It’s cloudy up and down the coast

But there are compensations.

Brief sightings of a crescent ghost

Still make it an occasion.

For more of the financial and reputational benefits football has brought Rutgers, go here.

No comments | Posted December 12, 2018 3:40PM by Margaret Soltan | [email protected]
Categories: sport
The man famous for saying “Without God, We Are Nothing”…

… turns out to be quite something.

2 Comments | Posted December 12, 2018 3:12PM by Margaret Soltan | [email protected]
Categories: just plain gross
“This is the first time in Massachusetts that a doctor has been charged with manslaughter for overprescribing opioids.”

But it’s certainly not the first time in a lot of other states; more and more doctors are doing jail time for killing their patients.

Frees one Baylor boy after another.

They jest got into some scrapes.

In Waco you look after yer brother.”

And good lord!  It’s hard to keep up with all the Baylor raping.  Here’s a handy timeline, just to get you started.