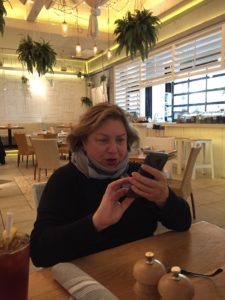 Her 2008 book about beauty — cowritten with her friend and colleague, Jennifer Green-Lewis — is titled Teaching Beauty in DeLillo, Woolf, and Merrill. Publisher: Palgrave Macmillan. Click on the title to go to its Amazon page, and to read some excerpts from it.

Many people encounter Soltan for the first time via her timeless classic, “The Faculty Bench.”

You can see Soltan in all her glory if you download an interview she gave in 2007 – a chat on the PBS Lehrer News Hour about Doris Lessing.

Soltan made a second appearance on the Lehrer News Hour to talk about Dan Brown’s book, The Lost Symbol.

You can hear her talk to Radio Poland about her memories of the Polish artist Wojciech Fangor here (click the listen icon).

You can also hear her talk about Norman Maclean, author of A River Runs Through It, to the BBC, if you go here. I’m toward the end of the December 14 program.

Soltan began, in March 2012, a series of lectures on poetry, available to the world via Udemy, a MOOC. Her course is part of Udemy’s Faculty Project. In October 2015, she had 11,877 students. The course is now closed.

Soltan’s husband is a professor of political science at the University of Maryland.

You can watch a seminar he recently gave on economic development at the Organization for Economic Cooperation and Development here.

Tanja is a true and brave fighter for Ukraine.  The link over her name is to her Facebook page, where you can follow her activism.

UD‘s husband is named Karol Edward, after Charles Edouard Le Corbusier, in whose Paris atelier his father worked after the war.

(Footnote 54, The Final Testament of Père Corbu: “See the letter [Jerzy] Soltan wrote [to LC] from Warsaw on 27 April 1950… ‘Hanka (my wife) is most probably pregnant – if it is a boy, he will certainly be named Charles-Edouard!'”)

Her daughter, Ania Soltan, lives in Washington, DC, where she works at Hakluyt.  She spent the summer of 2013 at the Abbey Theatre, on an internship. Before that, she worked for Congressional Quarterly Press while finishing up at GW. She was a member of the GW Sirens, winners of the 2010 Battle of the A Cappella Bands at GW (Ania’s the blond in glasses just to the left of the soloist). She sang in a gospel choir with Bruce Springsteen at the Super Bowl. Her group also sang with him at the Obama inauguration concert.

On Sunday, December 6, 2009, she performed with the same group at the Kennedy Center Honors. They sang The Rising in honor of Bruce Springsteen, one of the honorees. Instead of singing it with Springsteen, who watched from the audience, they sang it with Sting. Here’s a You Tube, with the kid – long blond hair, glasses – showing up at 1:48. (UD thanks a reader for telling her that an earlier You Tube of the event was no longer working.)

In December 2013, she sang with Diana Ross at the same event.

Soltan’s sister, Frances, is a Morrissey fanatic. Her niece, Carolyn, is the indispensable webmistress of University Diaries.