You’ve been gone so long!

Once again we get to hear your song.

No comments | Posted April 22, 2022 8:49AM by Margaret Soltan | [email protected]
Categories: Ministry of War
“With a single petulant blow…

… he advocated violence, diminished women, insulted the entertainment industry, and perpetuated stereotypes about the Black community…

Smith’s slap was… a slap to women. If Rock had physically attacked Pinkett Smith, Smith’s intervention would have been welcome. Or if he’d remained in his seat and yelled his post-slap threat, that would have been unnecessary, but understandable. But by hitting Rock, he announced that his wife was incapable of defending herself—against words…

This patronizing, paternal attitude infantilizes women and reduces them to helpless damsels needing a Big Strong Man to defend their honor least they swoon from the vapors. If he was really doing it for his wife, and not his own need to prove himself, he might have thought about the negative attention this brought on them, much harsher than the benign joke. That would have been truly defending and respecting her. This “women need men to defend them” is the same justification currently being proclaimed by conservatives passing laws to restrict abortion and the LGBTQ+ community.

[His acceptance speech] was about justifying his violence… Young boys—especially Black boys—watching their movie idol not just hit another man over a joke, but then justify it as him being a superhero-like protector, are now much more prone to follow in his childish footsteps.”

Next year’s Oscars: Another attack, this time with a gun.

China still has a ways to go. But better late than never.

That leaves Tucker Carlson and his ode to you know who:

No comments | Posted March 17, 2022 6:28AM by Margaret Soltan | [email protected]
Categories: Ministry of War
All Russia United in the Wake of the Yacht Seizures

Yachts, wha hae from Hamburg fled,
Yachts, wham Vlad has aften led;
Welcome to your glory bed,
On to victory!

Wha for yachtman’s king and law
Freedom’s sword will strongly draw,
Freeman stand, or freeman fa’,
Let him follow me!

Yachts, wha hae from Hamburg fled,
Yachts, wham Vlad has aften led;
Welcome to your glory bed,
On to victory!

They’ve got all the obscenity anyone could want in their head of state.

Sing it with me:

They’re a couple little shits, by golly!
Any vile endeavor, Cruz and Hawley go together.

Tracking Trump along his route unlawly

Josh and Ted are lusting

‘I work for United Airlines, and I’ll take your fantasies about killing powerful women up up up and away.’

[Donald Trump] spoke to a near half-empty ballroom Friday during the keynote event of the Western Conservative Summit… [T]he event may not have been the best place for Trump to launch his Colorado campaign.

Here’s his audience. Invite these lads and get a full house.

Denny’s manager DaRhonda McFarland said a “huge” group of bikers entered the restaurant a couple of hours after the shooting. She was aware there had been a shooting at Twin Peaks, McFarland said, but “at the time, I didn’t know the magnitude of it.”

The bikers were seated and served, she said. Then suddenly, they all got up and left, with some not paying their bills.

No comments | Posted May 18, 2015 7:41AM by Margaret Soltan | [email protected]
Categories: Ministry of War
Maybe he means General Jack …

… D. Ripper. Though I doubt Chizhov shares his feelings about the communist conspiracy.

At a riveting session Friday before the annual Brussels Forum, the Russian ambassador to the EU, Vladimir Chizhov, appalled the audience of international officials and national security specialists by brazenly spouting the Moscow line: Russia was compelled to annex Crimea because Ukraine was in danger of becoming a chaotic “failed state” — as though the audience was unaware how much Russia’s own manipulations helped bring about this very chaos.

… [T]he former president of Georgia, Mikheil Saakashvili, [responded:] “I have no respect for Ambassador Chizhov. He reminds me of a character from ‘Dr. Strangelove.’” 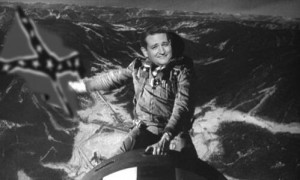 … the University of Oregon is working!

Season of fists and ripe concussedness!

— To alter Keats slightly as UD shares with you her excitement at the prospect of the return of university football… Those who scoff at the notion of student-athletes forget the contribution players make to the philosophy and physiology of violence. If our schools somewhat neglect their players’ brains while they live, this is amply recompensed by the postmortem attention lavished on their cerebral tissue. And the remarkable human wastage on-field prompts high-level discourse on violence. Dan Le Batard writes:

The gladiators who choose this particular career path are often shaped by broken backgrounds that help them arrive at football … with some sharpened and rewarded character traits that might not serve them as much away from the game. It is not a coincidence that the majority of football arrests occur during the offseason, when players have too much free energy and free time away from the [game’s] more disciplined violence …

This is not to suggest all angry, violent men would be good football players; it is to suggest you’ll find a lot of angry, violent ones in some of your best huddles. And football does a hell of a job of not only finding men who live on the edge of acceptable behavior but also feeding and needing them.

Or, as the words emblazoned on a cafeteria wall at the University of Oregon’s just-completed Ministry of War have it: EAT YOUR ENEMIES. Like the witch in Hansel and Gretel, like Buffalo Bill in The Silence of the Lambs, the University of Oregon boasts a special room where it fattens its young; but UO goes those stories one better by plastering the room with propaganda. Kill! Kill! Kill!

Le Batard points out the traditional conundrum of university football: You can’t win without significant numbers of unstable violent people on your team; but tip over into too many violent people and you’re going to be in legal trouble.

The last time Colorado was championship good at football, Sports Illustrated reported that one-third of the roster had been arrested. Ohio State went more than four decades without a national championship … until Maurice Clarett. Nebraska went without a national championship for almost a quarter of a century … until Lawrence Phillips. You can find links between arrests and compromised standards and winning all over college football, from those notorious University of Miami champions to the University of Florida ones who had 31 arrests in the brief time Meyer was there.

You can point to outliers, but it is much harder to find big winners without criminal complications than with them. Heck, in 122 years of football, Vanderbilt has been to only four bowl games but two of them have been the past two seasons … as their coach now uses a helicopter to find recruits in the Southeastern Conference . . . and last month had to kick four players off the team for alleged sex crimes.

You begin to understand the symbolic importance of spindly idiots in spectacles and bow ties at the level of the presidency. And cutesy quoters of scripture at the level of coach.

Because something is happening
But you don’t know what it is
Do you, Mister Jones ?