… is a MoMA box, inside of which is a Bodum Assam Brew teapot for her.

Because our family Christmas in Boston has been cancelled (covid), Joanna’s

vestibule will for some time remain clogged with tons of mailed gifts.

(We have all of them sent to her, and then wrap and distribute them.)

package, the whole what’s inside the wrapped gift thing is kaput.

So UD has granted her permission to open it and start brewing, pre-

As a tea fanatic, UD can only imagine what it’s been like, staring

at that beautiful teapot day after day and being unable to use it.

No comments | Posted December 22, 2021 11:39AM by Margaret Soltan | [email protected]
Categories: snapshots from cambridge
The Staircase at…

… Tatte, in Harvard Square. Les UDs are on their way back home to ‘thesda.

‘When the inner life is not easily disturbed it has achieved what is to Freud as nearly ideal a condition as he can imagine. There is something Oriental in the Freudian ethic.’

In light of the controversy over its authorship, UD, beachside, is revisiting The Mind of the Moralist.

And go figure. As she reads Sontag’s/Rieff’s/Freud’s repeated … mantra that we simply cannot reconcile, and are stupidly self-destructive to try to reconcile, instinct and civilization, UD experiences a vivid memory of Agnieszka Osiecka – an alcoholic – raising a very full glass at a lunch table in Hanka and Jerzy Soltan’s Cambridge house. This would have been a few years before her death in 1997.

“To the continued success of our hopeless cause!” she shouted to the gathering, and we all laughed.

… UD wends her way, yet another year, to Boston, for a Soltan Christmas. Longtime readers know UD dislikes creaky old Boston and certainly wishes she didn’t have to go north in December. But at least she’s going south in January – Sanibel Island, a place I’ve always wondered about, and will of course blog about here. 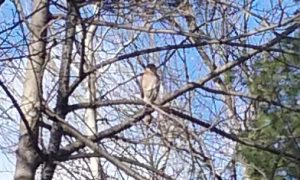 …on the elegant streets of Cambridge.

It was as close to the bird as she could get.

She’s pretty sure it’s a hawk of some kind.

… and broad sculpted staircases with immense stained-glass windows at the landings. I glance through a window and catch the ghosts of liberals past – Arthur Schlesinger and John Kenneth Galbraith specifically – chatting on either side of the stone wall separating their big dreary Cambridge gardens.

A few yards behind these summoned luminaries looms the campus whose iconicity-to-actuality ratio UD has always found lopsided. The world dreams about Harvard, while Harvard itself stands in an almost-permanent bad weather snit, many of its major buildings brutalist and its central quads a dispiriting brickyard.

UD has always found these sorts of grandeur-to-ground-level gulfs bracing, refreshing, happy-making, as when she discovered that Phillip Larkin was a pissy old masturbator.

Hers is a common enough reaction. The most-praised portrayals of Winston Churchill show him as a shambling ass.

At the darkest, coldest time of the year, I am in an old house, beside an old campus, in a very old city. The operative words are dust and dusk. Weak sunlight gives out at around two o’clock by the brooding grandfather clock in the hall, and the already-drifting house settles into true REM sleep. Across from the clock, a fine empaneled library is a museum on its way to being a mausoleum. The bound words of the prolific JKG maintain, on its shelves, a stunned silence. What happened to the world?

Such is the delicacy of this preserved interior that whenever UD spills some tea or dislodges one of the ruglets on the stairs, she smiles and thinks I am UD, destroyer of worlds. But there is a praiseworthy piety – world historical, filial – that wants to keep things as they are. The servant-summoning technology still works: Press the Library or Third Hall button on the Clark and Mill Electric Co Cambridge and Boston panel, and out comes a chirp.

Ghosts, and catastrophes. You think less about the grandeur and more about the ground-level grief when you’re actually here: The young son whose death threw Galbraith into a tailspin. The gruesome public assassination of Benazir Bhutto, guest of honor at one of his celebrated garden parties. Galbraith’s son Peter spends his life pacing the aftermath of global atrocity.

You could say UD currently sits (she’s in the library at five AM) at the pinnacle of elitism; you could say she ain’t climbing any higher than atop this soft leather chair resting on one of the gargantuan rugs Galbraith or Galbraith junior brought back from India or Afghanistan. But it’s only the trappings. What’s been able to be held in amber. This place is the genuine Henry James (Harvard Law, 1872): The affluent society, expansive, sedate; and the cry of pain almost out of earshot.