… features Jerzy Soltan’s 1960 design (in collaboration with other designers/painters/architects) of one of the city’s central train stations. The station won awards, but over the years fell into disrepair, and apparently looks like not much now.

Here’s an article about his design work; and here’s a picture of a Soltan relative sitting on one of the benches in Warsaw.

Update: UD thanks a reader for this link to an English-language article about Jerzy Soltan’s benches.

… appears in this New York Times essay about Brutalist architecture in Poland.

Poland’s Modernist structures had, in fact, first appeared as a form of change within the Communist system, a vernacular of liberation for the country’s architects, who were finally permitted to move beyond the strictures of Stalin’s Socialist Realism. Amid the general thawing of the Khrushchev era, many of these architects — among the most prominent were Halina Skibniewska and Jerzy Soltan, the latter of whom studied under Le Corbusier — were for the first time permitted to travel to countries on the other side of the Iron Curtain. The style they adopted was largely a replica of Western Modernism. 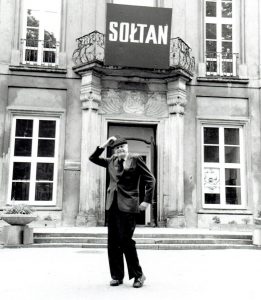 During a citywide celebration
of his work. 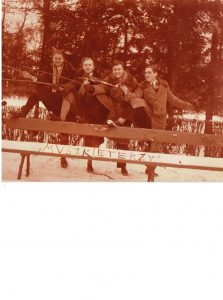 Jerzy Soltan (far left) playing in
the snow with his fellow musketeers. 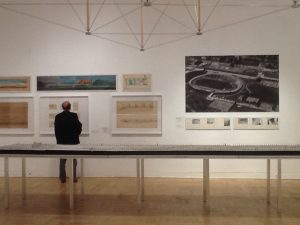 … at the exhibit honoring his modernist designs. 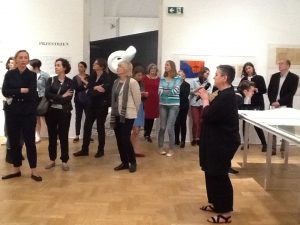 … is the name of the upcoming show at the Zachęta Gallery which features UD‘s father-in-law and two other Polish luminaries.

The announcement in English.

No comments | Posted April 21, 2018 7:12AM by Margaret Soltan | [email protected]
Categories: snapshots from warsaw
Planning to be in Warsaw this May?

Starting the 21st, you can see an exhibit here that features the work of Mr UD‘s father, Jerzy Soltan. 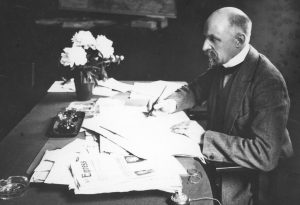 Two decades ago I spent a year in Poland, teaching at the University of Warsaw.

One afternoon I took my three-year-old daughter to an amusement park – a thrown-together bunch of rides that had suddenly appeared at the foot of the Palace of Culture.

I chose one where you sit inside the suspended body of a plastic duck and go around. It must have been sort of like this.

We hadn’t been in Poland long; I spoke little Polish. The woman who took my money seemed to be jabbering some instructions at me.

I settled my very excited daughter (La Kid to you) next to me. Every other duck was taken by another excited kid.

The ride starts up – loud music and our duck’s slow gathering of its energy until we’re moving fast and smooth around and around, maybe eight feet from the ground. I’m happy; the kid’s happy. We’re looking around. We’re giggling.

Suddenly there’s screaming and it seems to be directed toward us.

Żółta kaczka. It means yellow duck. She was identifying me, trying to get my attention, trying to tell me something. People on the other ducks were staring.

For the rest of the ride, while my daughter reveled in the breeze and the ground-level views, I worried.

As she helped us out after the ride was over, the woman gestured to me that the yellow duck featured a control column which we were supposed to be using to make our duck fly. Our duck didn’t just graze the earth and go round and round. It flew. It flew up and down at our command. We’d entirely missed that. We’d paid for a duck that flew, and we hadn’t gotten our money’s worth.

But of course we had gotten our money’s worth – the ride as such, the ride as interpreted by happily-distracted-by-child, linguistically retarded UD, was exactly what both of us wanted. A tranquil circling of an odd world. Only someone else’s insistence that there must be more to it disturbed us.

La Kid called to see how her father was doing. We cancelled dinner with our friends the Elkins and the Swistaks. Mr UD spent most of the day listening to and watching Polish media. His nephew Andzrej called from Warsaw. Les UDs talked and talked and talked about the catastrophe.

When she wasn’t talking or reading about the crash, UD remembered 1992, her year in Warsaw.

She wrote about it here, in the journal Salmagundi , in 1994.

The article is an orderly little reflection on post-Communist Warsaw, on being an American and a woman and a Jew in Poland… But what went through her head today wasn’t pulled together like that. It was a series of disconnected but enduring memories of that Fulbright year, when UD taught in the literature department and Mr UD in political science at the University of Warsaw.

She thought first of her black jacket. UD had bought, in the States, an expensive quilted jacket, and it hung in the bedroom of the elegant small apartment Mr UD had found on Ulica Boduena.

The attractive young woman they’d hired as a nanny for two-year-old La Kid was lively and sweet with the baby, but she was also a thief. UD knew she admired the jacket, found it exciting, liked to try it on… And when UD left the apartment for a few days (giving a paper somewhere), the nanny took advantage of her absence to remove the jacket from the closet. UD almost never wore it, and the nanny knew this. The nanny also correctly recognized that UD was scatterbrained and might not notice anything.

And yet I noticed right away. I must have figured she’d steal it. I noticed and did nothing. I remember thinking Oh let her have it. Let her show off her expensive quilted black jacket. I don’t care.

I remembered another scene in that apartment. Our landlord, a successful thirtyish Warsaw entrepreneur, came to the apartment one day to fix something for us. Mr UD wasn’t there, and, on his way out, the landlord – who spoke good English – suddenly took me in his arms, said something ridiculous about how sad he was, and set about passionately kissing me.

I snorted and pushed him out the door. He went quietly…