“Why not? … They need to get bright thinkers to repackage the whole thing. There’s just too much baggage to carry. It’s just an absolute mass of information about corruption wherever you look. The word FIFA globally has got just the worst image in the world: If you are trying to sell the FIFA brand, if anything those four letters stand for absolute total corruption and it’s so unattractive.”

Steal Til You Can’t Steal No More

“Let’s say you’re a super-wealthy single dude who just sold your company,” [says the real estate agent for a $500 million Los Angeles house]. “You’ve just moved to L.A. and you don’t know anybody, so you hire someone to fill your house with partyers. You want everyone to know who you are, but you don’t want to talk to anybody. So you go sit in your V.I.P. room.”

… [One] buyer, from Malaysia, paid [the agent] $40 million for [another LA] home and then promptly gutted it. “That house looked like this,” he said, stretching his arms out wide for emphasis. “Furniture! Beautiful! Everything!” Eventually, he said, the Department of Justice took possession of the home after the owner ran into legal trouble. It’s been empty ever since.

2 Comments | Posted December 31, 2017 6:41AM by Margaret Soltan | [email protected]
Categories: extracts
“[T]he college sports machine keeps cranking out expensive entertainment, and the scandals that go with it, while sheltered by the scholastic equivalent of a Cayman Islands tax dodge.”

Ah. The lifeblood of this blog.

No comments | Posted December 30, 2017 10:37PM by Margaret Soltan | [email protected]
Categories: sport
What a pleasure to see out the year with a true heroine.

In a few days I am going to lose two World Champion titles – one by one. Just because I decided not to go to Saudi Arabia. Not to play by someone’s rules, not to wear abaya, not to be accompanied getting outside, and altogether not to feel myself a secondary creature. Exactly one year ago I won these two titles and was about the happiest person in the chess world but this time I feel really bad. I am ready to stand for my principles and skip the event, where in five days I was expected to earn more than I do in a dozen of events combined. All that is annoying, but the most upsetting thing is that almost nobody really cares. That is a really bitter feeling, still not the one to change my opinion and my principles.

She stands to lose a couple of million dollars.

She once played in Iran, where she was forced to cover her head, and you know what? She didn’t like it. So she’s not doing it again.

And oh yes – SA is becoming ever so much more free for women… For instance, if Muzychuk follows new, slightly less repressive orders on what she can put on her body, she’ll be allowed to play.

But no. Muzychuk is one of those women you can never satisfy… One of those loose Western types who fail to see themselves as secondary.

It will be fun to watch SA’s amazement as it liberalizes this and liberalizes that to no avail. Franchement, SA could become Paris entre deux guerres and UD – and, she suspects, millions of other women – wouldn’t darken its door. The big one at Yellowstone will blow before Saudi Arabia begins to look like any sort of destination for a self-respecting woman.

We’ve chronicled for years on this blog the remarkable number of truly out-sized financial criminals who got their training at the University of Pennsylvania’s Wharton School. Here’s another one – a Muslim who used some of his money to “to undo negative misperceptions of [Muslims] in [the] media.”

A gray dawn breaks
Over the deaf-mute space ocean
And UD shuts the window of morning readings
To tap out electric greetings:

The better part of wisdom is to share
Keep your mind in hell and do not despair.
In interludes among fests of nativity,
Do not forget the voice of our declivity:

“Why do people fear dying alone and unloved?
What difference does it make?”
“You know in the end, none of it matters,
What happens to you in your life. Not suffering.
Not happiness or unhappiness. Not illness. Not prison. Nothing.”

Among some porcelain, among some talk of you and me
Do not forget: The blood jet is poetry.

Caretaker! take care, for we run in straits.
Daily, by night, we walk naked to storm,
some threat of wholesale loss, to ruinous fear.
Gift us with long cloaks & adrenalin.

Who haunt the avenues of Angkor Wat
recalling all that prayer, that glory dispersed,
haunt me at the corner of Fifth & Hennepin.
Shield & fresh fountain! Manifester! Even mine.

[At school, Evelyn Waugh founded] the Corpse Club, “for those who were weary of life.”

3 Comments | Posted December 22, 2017 5:17PM by Margaret Soltan | [email protected]
Categories: extracts
‘A 14 years old orphan in Maralal who was due to be married off after being subjected to female genital mutilation has been rescued.’

A lede that packs in a lot. 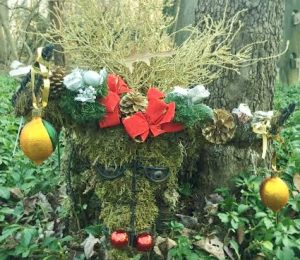 … as she does every December,
for a Polish Christmas.

FarmHouse Fraternity, which stands for Faith, Ambition, Reverence, Morality, Honesty, Obedience, Unity, Service and Excellence, was sanctioned, or penalized, for indecent exposure, which according to the university’s code of conduct, is defined as intentionally exposing genitals or other intimate areas in a public place where others are present. The exposure must take place where it is “reasonably likely” to offend, annoy or alarm another person…

… The organization received another sanction in December 2015, also for indecent exposure.

Then, taking a seat in our cabin to share
Camusian notes on the silence of the universe

No comments | Posted December 20, 2017 5:19AM by Margaret Soltan | [email protected]
Categories: poem
University Football: Is there a word that’s more pathetic than “pathetic”? Getting tired of using it.

What else are you going to watch? “General Hospital”? “Young and the Restless”? “Rachel Ray”? “Maury”? The Liverpool-Swansea EPL match?

Time to dust off the Jung.

UD thinks of her friend Paul Laffoley at this moment. He didn’t live to see the Navy footage.