… writes Richard Wilbur in the poem Year’s End; and let’s consider the point he’s making in his stately, nicely rhymed stanzas as we stare December 31 in the face.

At the very end of Sunday Morning, Wallace Stevens describes us – well, describes “casual flocks of pigeons” symbolically us – flying in a downward direction at night:

And in the isolation of the sky,
At evening, casual flocks of pigeons make
Ambiguous undulations as they sink,
Downward to darkness, on extended wings.

Down we go to death; but on the other hand our wings are “extended” — our arms open out to “More time, more time,” Wilbur writes.

And: As we sink down, we create beautiful, complex “undulations.” Formal grace, and mystery, express themselves in the patterns of our existences.

Evening’s one thing; evening on December 31 packs mortality-intimation awfully tightly. Stevens’ poem after all is about morning, Sunday morning, the way Sunday morning can be dreadful if you’re suspended somewhere between secularity and belief, if you’d like to believe in some form of soulful immortality. Wilbur has us at night, and the night of December 31 at that; so questions of our mortal fragility and the shape – make it the undulating shapeliness – of our lives – are perhaps even more urgent.

Both poets in any case want to capture the peculiar tenterhooks we’re on – brightly appareled in our lives, we stretch our wings. Yet our true condition is, writes Wilbur, like that of leaves trapped in ice: “Graved on the dark in gestures of descent.” We’re “flutter[ing]” still, but down under the ice. We’re gesturing still, but always in postures of descent. Downward to darkness on extended wings.

These sudden ends of time must give us pause.
We fray into the future, rarely wrought
Save in the tapestries of afterthought.

The patterns, if patterns there are, in our frayed lives, express themselves only after we’re dead. Or maybe something of a pattern occurs to us while we sit, in the isolation of the evening sky, prodded into contemplation by a sudden end of time.

… a first-rate summary of the mind-blowing fraud that is the American drug industry.

She features, in the article, a few of its main academic enablers.

… hyperurbanized Tokyo, UD wakes up, just now, to the silent hills above Brattleboro.

The hills are cold blue waves under the hot pinks and oranges of the sunrise, and UD stands at her bedroom window, her feet cold on the wide plank floor, taking in the scene.

Regular readers know UD dislikes the cold; and she certainly dislikes the iciness still underfoot here after the blizzard. But who could dislike the silence of hills in snow?

A good place to see in the year.

2 Comments | Posted December 31, 2010 7:59AM by Margaret Soltan | [email protected]
Categories: snapshots from vermont
Give It Back For Jobs…

… where she’ll celebrate the New Year and Peter Galbraith’s birthday.

Right now she’s off for last-minute shopping in Cambridge.

No comments | Posted December 30, 2010 10:53AM by Margaret Soltan | [email protected]
Categories: snapshots from home
“Here is a kind of blurry photo that I took from the Tokyo Tower main observatory…

… The mountains on the left include Mt. Fuji.” 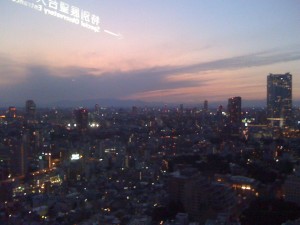 Here’s one of her photos.

Mike Royko’s motto for the city of Chicago has become the motto of California’s public university system.

These soon-to-be pensioners at the University of California have given selflessly to the institution for decades, earning only $400,000 a year or so. As if that pay weren’t insulting enough, the system might not lift the cap on their retirement benefits.

They want UC to calculate retirement benefits as a percentage of their entire salaries, instead of the federally instituted limit of $245,000. The difference would be significant for the more than 200 UC employees who currently earn more than $245,000.

Can you imagine retiring on anything under two hundred thousand dollars a year? The mind boggles.

Now that you’re here, feel free to look around.

A physician who rocked a UC Irvine fertility clinic 15 years ago when he and a partner switched the frozen embryos of dozens of unsuspecting women, has been taken into custody by Mexican authorities, officials said Monday.

Ricardo Asch, one of two fertility doctors who fled prosecution as the scandal unfolded, was arrested in Mexico City on Nov. 3, said Thom Mrozek, spokesman for the U.S. attorney’s office in Los Angeles. He remains in custody as U.S. prosecutors seek to extradite him to Southern California to face federal mail fraud and tax evasion charges

No comments | Posted December 28, 2010 7:12PM by Margaret Soltan | [email protected]
Categories: Sport
“University students, normally a placid bunch, over the last weeks have blocked roads in protest of stipends amounting to $30 million a year for the eternal students of the kollels, which are seminaries for married men.”

The New York Times features a story UD‘s been covering for some time – the scandal of Israel’s subsidized, ignorant, ultra-orthodox.

In the haredi [school] system, secular subjects like math and English are barely taught. Many see this situation as unsustainable.

“We have a few years to get our act together,” warned Dan Ben-David, an economist and director of the Taub Center for Social Policy Studies in Israel, an independent research institute.

“If not, there will be a point of no return.”

Israel spends its education dollars on thousands of eternal students who learn little and teach their children just as little. Actual university students can suck it up.

… the dean of the recently opened, totally unnecessary, school of law at the University of California Irvine.

In response to the terrible crisis in that state’s public system, Erwin Chemerinsky warns darkly against

freezing or decreasing executive and faculty salaries. If the University of California is going to retain and attract high-level faculty, it must pay the same as comparable schools across the country. Over the last few weeks, I have negotiated salaries with superb professors we are attempting to recruit who are currently teaching at Harvard, Northwestern and Yale. The University of California must match their current salaries or they will not come. As much as I love living in Southern California, I could not have afforded to leave Duke University if it meant taking a substantial pay cut.

Well, let’s get to it. How much do you make? How much do your law school colleagues make? How much do they teach? How many of your graduates get jobs as lawyers (the Irvine school opened despite the fact that California has a glut of lawyers, and large numbers of unemployed law school grads)? And, uh, didn’t you tell me, when justifying your unjustifiable new school, that your faculty would be all about turning out public interest lawyers? So… hard-nosed, hyper-capitalist, private sector salaries for our faculty, but of course! And crappy non-profit positions for our idealistic students.

I mean, I ask how much you make because you say you couldn’t afford to live in California unless you earned what you earn. What do you earn?

Let’s say at Duke you earned $300,000. Are you saying that you couldn’t afford to live on less than that?

Remember the University of Chicago’s Todd Henderson. And he teaches at a private school…

Vous savez… UD‘s father, a scientist at the National Institutes of Health, made a lower salary than he would have in the private sector; but he didn’t seem to mind, because he thought public service was a high calling. What happened to that whole thing?

Listen to Kristin Luker, Chemerinsky. She’s a colleague of yours at Berkeley.

UPDATE: From the comments at TaxProf blog:

Going from US News rankings, at the top [of California’s universities] are Stanford and CalTech– both are private and so from the state’s point of view are cheap/free (never mind federal research dollars for a second). Then we get to the state university system: UC Berkeley, USC, UCLA, UC San Diego, UC Davis, UC Santa Barbara.

Then, after all these schools, you finally get to UC Irvine. I can see the rationale for their flagship schools (and even having more than one flagship given the size of California). I can see the argument for a strong set of second-tier institutions, too.

Can anyone explain why Irvine, ranked ninth in the whole wide state, is recruiting from Harvard, Northwestern and Yale? Just what is Chemerinsky saying here? By his own argument, being world-class is expensive, and so from a return-on-taxpayer-investment perspective, Irvine shouldn’t be frozen, they should be gutted to keep the top California universities on top.

Chemerinsky is arguing against freezing or cutting the law school. What he should be defending is the law school’s existence in the first place.

… and it’s all rather strange and comforting, the swaddle of a warm hotel room with a big tv and baked goods and second-floor views onto massive wind and snow.

UD spent the whole day in this room, reading The Memory Chalet, singing Gilbert and Sullivan songs with her daughter, and watching a film about Glenn Gould with Mr UD.

Inside this room today, life was all small domestic bliss (UD‘s missed her daughter, just back from a semester in Ireland). Outside, the white-cold rage of the world whirled high and wide, and we looked at it, amazed into silence.

1 Comment | Posted December 28, 2010 2:52AM by Margaret Soltan | [email protected]
Categories: snapshots from home
The founder and editor of the website Arts and Letters Daily…

… has died. Denis Dutton, a philosopher, taught for many years at Canterbury University.