UD at Inside Higher Ed About Margaret Soltan Other Writings Subscribe to UD's Feeds
Last night of our stay by the Bay.

Well, the Bay. Plenty of Bay … seasoning for UD, a native Marylander whose father loved to take his little motor boat out on it and catch fish for dinner. We had a weekend house here – much further up the western shore than Pier 450 – when I was young.

Yesterday, when we talked to some boat owners who pulled up, elegantly, charismatically, along the Pier 450 pier to join friends for lunch, they happily admitted to regret – often; not always – at having bought their boats. “You know what B O A T stands for, right? Bring Out Another Thousand.” “Every time I take it in for maintenance I regret buying it.”

The vastly interesting world of this vast estuary … Its spectacular natural world.

Its cultural world, where oysters are planted to bring back the almost-defunct oyster fishing culture. The locals talk distinctly funny, drive vast dusty SUVs and pickups with Jesus Loves You plastered all over them, tatoo themselves. We had a rambling uncomprehending chat with a drunk woman possessed of the local occult accent and also slurring her words. It was important for her to convey to us that at Buzzy’s you can choose your own beer out of special fridges but we didn’t understand why this was noteworthy. She was headed into a store that calls itself MARKET, but when you go in (we were looking for insect repellent) it’s 99.99% alcohol.

Both nights the sky blackly glistened, and we were happy to wake at three and walk along the dead fields and dark pier and drink it in.

Here at the bay, the night sky blasts out at you as soon as you step from your door at three AM.

There’s a meteor shower tonight, but we didn’t see any meteors.

The fisherman at the end of the pier – clearly rather spooked by our apparition – indeed reported having seen shooting stars in the jeweled sky, “but only a few.” In each hand he held a large rockfish. Was he fishing illegally off the hotel’s pier in the wee hours? Is that why we spooked him?

We lay flat on white lounges on the small beach, wrapped in many layers, and looked for Orionids. Just behind us lay enormous flat fallow fields that stretched to the edge of the bay. Absolute silence and stillness, ground and sky, surrounded us. We saw no satellites, and no jets.

No comments | Posted October 22, 2022 2:41AM by Margaret Soltan | [email protected]
Categories: snapshots from the Chesapeake
Off to …

… ‘this great abeyance’ — not Plath’s Berck-Plage, but our own Chesapeake Bay, where Les UDs will wander islands and shorelines, scoping out black sky as well as family reunion locations.

At the moment, their best location for next year’s Perseid meteor shower seems to be Assateague Island National Seashore, which allows late night visits. But we’re still looking. A good excuse, in any case, for some adventures.

… meteor shower, and she finds herself, à ce moment-là, at Pier 450, right on the Chesapeake Bay – a place pretty far from any settlements, and, if you stay here, you have private use of their pier all night long.

The first thing I saw, ambling down the pier and glancing at the clear water, was… a turtle? A dark reptilian head popped up to check me out, and I bent down to greet it, but lookee here: It trailed three feet of tail and turned out to be a northern water snake.

There’s a sculpture garden nearby.

And on Solomon’s Island, also nearby, I found a somewhat shabby Corbusierian house with enviable water views. I toyed with suggesting to Mr UD (who isn’t with me) that we try to buy it.

Yesterday I read Joseph Brodsky’s poem, A Part of Speech, which brilliantly and movingly evokes the unresonant character of what used to be his home.

… A nowhere winter evening with wine…

… [A] star blinks from all the smoke in the frosty heaven,

and no bride in chintz at the window, but dust’s gray craft,

plus the emptiness where once we loved…

… As for the stars, they are always on.

That is, one appears, then others adorn the inklike

sphere. That’s the best way from there to look upon

The sky looks better when they are off.

Though, with them, the conquest of space is quicker.

Provided you haven’t got to move

from the bare veranda and squeaking rocker.

As one spacecraft pilot has said, his face

half sunk in the shadow, it seems there is

no life anywhere, and a thoughtful gaze

can be rested on none of these.

since you dream these days only of things that happened…

But here, at the very bottom of mine own Maryland, a small state still insufficiently explored by ol’ UD , lie multiple scenes so resonant as to nudge up against surreal. The dark disapproving forest sculpture, the gray unmoving gulls at pier’s end, the massively overcast and also blue and also white bay sky. These will nudge me into dreams not only of things that happened.

First, of course, they went to a local tea room. 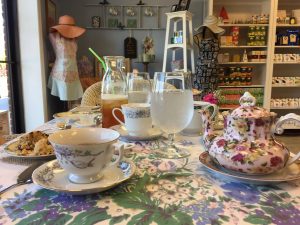 Then we walked the
Chesapeake Beach Railway Trail. 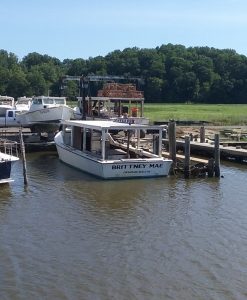