UD at Inside Higher Ed About Margaret Soltan Other Writings Subscribe to UD's Feeds
Ruth Lilly, who gave all that money to Poetry Magazine…

… has died, age 94. She came from the immensely wealthy Eli Lilly family.

… “The gift is the essence of bad philanthropy — an overblown act of generosity that undermines its own possible efficacy,” the editor and poet Meghan O’Rourke wrote in the online magazine Slate…

the Oxford of our first year – utterly Bohemian & fantastic – when everyone was master of their fate and captain of their soul in a way that I have not met since. Those people just didn’t care a damn – and they lived vividly, individually, wildly, beautifully.

There – right there –
is University Diaries’
New Year’s toast to you: 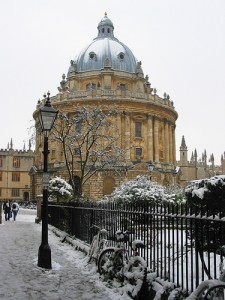 the Morrissey fanatic. Click on
the image for a bigger picture.

1 Comment | Posted December 31, 2009 10:39AM by Margaret Soltan | [email protected]
Categories: snapshots from home
Texas Tech to Leach: Thanks for the Memories!

Leach’s buyout figure, $1.5 million, is actually cheaper at the end of the day than drawn-out litigation for the university.

Who says there won’t be drawn-out litigation on top of the $1.5 million?

YOU’RE CONCUSSED FROM PLAYING FOOTBALL FOR TEXAS TECH. YOUR COACH GIVES YOU A CHOICE – IMPRISONMENT IN A DARK ROOM OR INSIDE OF AN EQUIPMENT BIN. WHICH DO YOU CHOOSE, AND WHY?

Via the great website UO MATTERS, UD notes that a parking lot mainly used by University of Oregon law professors will now be for athletes:

Phil Knight [the donor who runs UO] was able to convert general university parking into special reserved slots for athletes only. Lot 34F …  was converted to parking a few months ago, and was apparently used heavily by professors at the law school.

Look out for the Mustang coming in real fast.

… [Football Coach Mike Leach] is the king of Lubbock. He’s bullied his administration numerous times over the last six or seven years. Leach and the school have bickered over his salary several times, and just last year the school president had to personally oversee Leach’s latest contract extension…

… Leach [has] revealed himself as dangerously irrational. He tried to sue Texas Tech so that he could coach “his” team in the bowl game. Are you kidding me? It’s not his team. It’s Texas Tech’s team…

All this, and Alberto Gonzales.

Plus they’ve got years of expensive litigation from the just-fired Leach to look forward to.

… For too long coaches have had it their way without question — salaries bigger than their state’s governor, courtesy cars, country club memberships. The student-athlete has to play his behind off year-to-year just to keep his scholarship… [A] $4 million contract doesn’t give you the keys to a university. Too often that’s what has happened. Coaches get away with this stuff with impunity because they can. Whether it’s a third-world dictatorship or the SEC, it’s unsettling to be reminded that absolute power corrupts absolutely…

… Harvard went under – it could never unwind those risky, un-collaterized debt swaps you-know-who put it in around 2005. … BU snapped up its athletic facilities at the bankruptcy auction. Tufts got the law and medical schools. Surprisingly, there were no bidders for the Harvard Business School. I guess the old adage was right: Without the H, it’s all BS.

Time magazine, in an article titled Are College Football Coaches Out of Control?, notes the increasing sadism toward players among university football coaches.

UD understands. You’re being paid more than anyone else on campus — often anyone else in the state — to win games. The pressure’s incredible. When the reputation of the university rests on your shoulders, you might have to concuss a few players to get the school where it wants to be.

But cheer up, Red Raiders! You’ve still got Alberto Gonzales.

The one thing you can always depend on when it comes to the classics, is that not everyone has actually read them, and those who have don’t remember much about them.

Everyone’s heard the jokes (and we’ve discussed the truths) that no one actually reads James Joyce’s “Ullysses.”

No comments | Posted December 30, 2009 12:33PM by Margaret Soltan | [email protected]
Categories: Scathing Online Schoolmarm
One of my parents must have given the other…

… a book of David Levine caricatures when I was a kid, because I remember first seeing his work in a hardback at home. Since then, I’ve seen his work mainly in the New York Review of Books.

… is featured in this Wired story about diploma mills.

… In 2003 and 2004, the Government Accountability Office surveyed just a handful of agencies and found 463 federal employees with fraudulent degrees.

The diploma operations thrive in part because of a lack of centralized oversight of higher education in the US. The Department of Education leaves the job of accreditation to a group of nongovernmental agencies, which in turn grant institutions the authority to award degrees. All other rules, as well as penalties for fraud, are up to the individual states — which are often lax about enforcement. (And no, the domain suffix .edu doesn’t guarantee authenticity.)

Fake institutions that pretend to be based abroad have an even easier time bringing in business and avoiding scrutiny. Governments generally don’t challenge the legitimacy of universities accredited overseas, which is why many bogus degree mongers create the appearance that their schools are foreign entities offering classes on the Web. And of course, the growing acceptance of online education has only provided more cover for this kind of scheme.

Modern diploma mills are also becoming increasingly industrious and sophisticated. They might send spam to a million people at a time and provide detailed transcripts and verification services. One of the latest tricks is establishing a fake accrediting agency to legitimize fake schools.

… [Gollin’s] aim … is to convince lawmakers that tougher criminal penalties are necessary to fight diploma mills. In 2006 he was elected to the board of the Council for Higher Education Accreditation, and he recently teamed up with a congressperson from Minnesota to help draft a federal bill that would tighten the definition of an accredited institution…

UD thanks Bill for the link.

The Kennedy Center Springsteen tribute’s happening now. La Kid’s group will come out with Sting in a few minutes.

No comments | Posted December 29, 2009 10:37PM by Margaret Soltan | [email protected]
Categories: snapshots from home
I was about to press PUBLISH…

… on this sad story, the murder of an Indiana University English professor, when all the electricity in the house, and up and down Rokeby Avenue, and all over Garrett Park, went out.

It was a sunny, pleasantly windy winter morning, so I threw on my coat and gloves and took the dog for a walk around our acre, picking up twigs and branches tossed everywhere by last night’s more powerful wind.

Across the street, evergreen limbs had fallen into my neighbor’s azaleas. I tried to lift the limbs, but they were too heavy. The Garrett Park maintenance crew eventually came along and took care of it.

I walked down the street and along the tracks to the post office, where I picked up a book Richard Fallon, a constitutional law professor at Harvard, sent me. It’s an academic satire titled Stubborn as a Mule, and it’s Fallon’s first novel.

Back in my front yard, I broke icy snow off of my own azaleas so that they would stop drooping, and I chatted with Elena, who lives across the street and had just come back from a week in Hilton Head.

“Look at these pictures,” she said, holding her phone out so I could see the beach and the sun.

Suddenly a rush of fire engines and HAZMAT trucks and police cars appeared. Elena and I followed them to Els Benjamin’s house, where there’d been a gas leak.

I walked back into my house, made a fire with some of the twigs and branches I’d collected, and sat down to play the piano. Mozart’s Fugue in E-flat Major, K. 153/375f , has UD written all over it, because it’s short, and has a manageable speed and a strongly voiced theme. I love to follow just a few notes as they open out to variations.

Tonight at nine o’clock on CBS Les UDs will be watching the Kennedy Center Honors. La Kid‘s in the chorus that sings with Sting in honor of Bruce Springsteen, so her parents’ noses will be pressed to the screen during that number.

Actually, she claims we should be able to see her quite easily.

One more thing: Les UDs will spend the
end of the year and the beginning of the next at an
inn in the Virginia countryside. Blogging will continue
as always.